Under its MS-26 strategy, Meijo University is committed to improving research capabilities based on strengthening its research centers, as well as through industry/academia/government collaboration. The Academic Research Support Center is also supporting research activities. Against a backdrop of 9 undergraduate faculties with 24 departments and a graduate school offering 9 postgraduate programs, the university is home to a wealth of research institutes and research laboratories that pass on the benefits of their advanced research capabilities to society. The university is also actively engaged in collaborative research with private companies. In addition, numerous grants-in-aid for scientific research have been awarded in a variety of fields.

2. Supported Program for the Strategic Research Foundation at Private Universities

After careful examination, the Ministry of Education chooses a research base that may perform well for this program, from a selection of universities that applied by planning research projects which either show the potential to contribute to society or which represent the cutting edge. The Ministry offers subsidies for research facilities along with equipment maintenance costs and research costs.

It was set up to contribute to society through research results built on the interaction of various researchers who excel in their field, and to promote interdisciplinary joint research both inside and outside the university (April 1, 1994)

We will continue to develop as a research base reaching global standards, while capitalizing on our features as a comprehensive research institute - not only through the normal method of putting out high levels of advanced research in both quantity and quality, but also through promoting a high standard of research and interdisciplinary joint research regardless of the field.

The "project department" promotes research based on individual issues, conducted by professors either individually or in groups.

The LED joint research center was established in April, 2011. It operates as a base that promotes joint research with companies and other research organizations.

It was established on April 2006, with the aim of utilizing Meijo University's knowledge and global network in order to contribute to both local and global society as an "intellectual core" relating to the sustainable development of Asia. 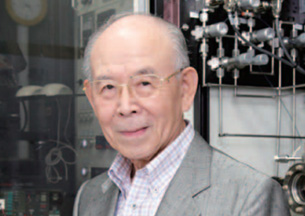 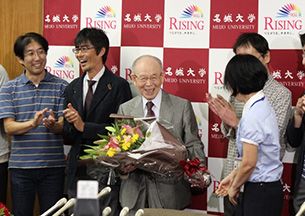 On October 7, 2014, the Royal Swedish Academy of Sciences announced that professor Isamu Akasaki of Meijo University received the Nobel Prize in Physics for 2014 with professor Hiroshi Amano and professor Shuji Nakamura "for the invention of efficient blue light-emitting diodes which has enabled bright and energy-saving white light sources". The light-emitting diodes (LEDs) are seen in many applications in our daily lives, such as light bulbs, traffic lights, mobile telephones, and flat-panel televisions. About 40 years ago, however, many researchers gave up to develop the blue LEDs since it was impossible to obtain gallium nitride (GaN) semiconductor crystals which could emit blue light. Professor Akasaki has devoted his life to basic research of GaN semiconductor crystals and development of blue LEDs . Through his persistent efforts with professor Amano, he eventually invented a low-temperature buffer layer for high quality GaN crystals in 1985 and the efficient blue LEDs with pn junctions in 1989. The Meijo University Faculty of Science and Technology was established in 1926 as the Nagoya Science and Technology Course. Since then, while marking a history that at 94 years is the longest of any private university in the Chubu region, the school has engaged in manufacturing-culture education. For the more than 200,000 alumni of the Faculty of Science and Technology and other academic departments of Meijo University, the award of the Nobel Prize to Dr. Akasaki was a long-awaited piece of joyous news.

Professor Iijima - Discoverer of Carbon Nanotubes, having a great impact on science and technology community in the world 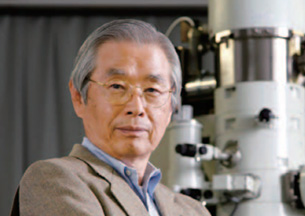 Born in Saitama Prefecture. Graduated from the University of Electro-Communications. Completed his Ph.D., majoring in physics at Tohoku University. After working as a research scientist at Arizona State University, and also a visiting scientist at Cambridge University, he joined NEC Corporation, and discovered carbon nanotubes there in 1991. He has been a professor of the Faculty of Science and Technology at Meijo University since 1998. He received numerous awards and honors for his discovery of CNTs and other achievements,including the Benjamin Franklin Medal, the Balzan Prize, the Kavli Prize, the Imperia Prize, the Japan Academy, the Order of Culture, European Inventor Award, and many others in Japan and abroad. He is a member of the Japan Academy and the US National Academy of Science. 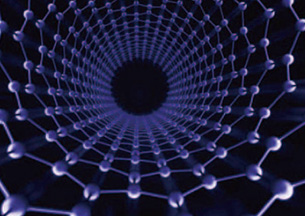 In 1991, Professor Sumio Iijima of the Faculty of Science and Technology, Meijo University, discovered carbon nanotubes (CNTs), a new type of carbon having a needle and tubular-shaped crystalline structure. Since the CNTs are of a nanometer-size structure (one-billionth of a meter), its discovery would not have been possible without high-resolution electron microscopes. Professor Iijima's pioneering work in research and development for the electron microscopy for some 30 years is another of his distinguished achievements before his discovery of CNTs. His first success in recording metal atom images in 1971, followed by imaging single tungsten atoms in 1977, can be termed the realization of the long-standing dream of seeing an individual atom. This was the first remarkable accomplishment achieved by an electron microscope since its invention in 1932. CNTs behave like silicon in being semiconductors, and thus to being fashioned into transistors, while having 10 times stronger tensile strength than steel, and also showing 1000 times higher current capacity than copper. These properties are expected to find applications in familiar products in daily life, industrial materials, fuel cells, and aerospace. The research and development proceed toward the commercializing of CNTs in a great number of areas and industries.
Professor Iijima encourages young students to become scientists and engineers without fearing failure. The professor's own experience has also led him to realize the importance of English as second-language in recent globalization of science and technology. He therefore uses often English in his teaching classes.